Another OnePlus Nord 2 explodes. The Chinese smartphone maker can’t claim it’s a one off case anymore 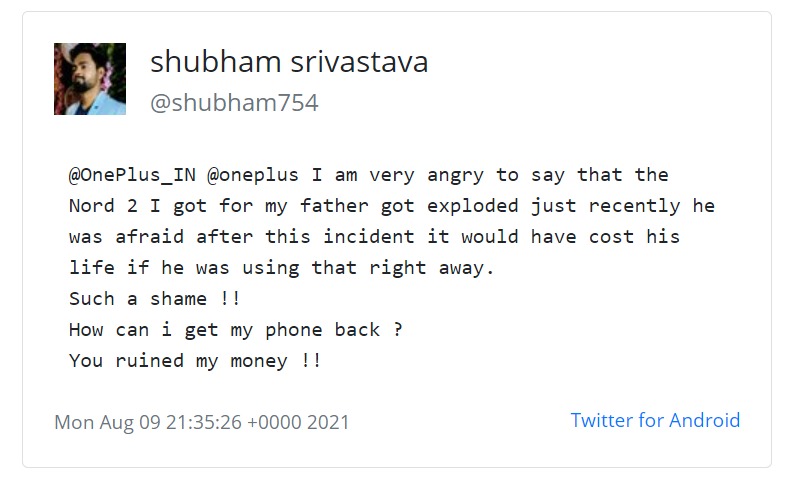 Update: OnePlus has officially released a statement where they have said that this was fake tweet and the OnePlus Nord 2 did not explode.

“Earlier today, we were notified on Twitter about an alleged blast case for the OnePlus Nord 2. We always take such claims very seriously and immediately look into each one to first verify the legitimacy of the claim. During our conversation with this individual, we were able to confirm that this alleged case was false and in no way involved any OnePlus product.

All OnePlus products undergo thorough quality and safety tests to ensure that they are up to leading industry standards and are safe to use. We also follow strict internal processes to ensure the health and safety of our users, while also protecting the reputation of our brand. We urge the public to exercise restraint in judging unverified allegations such as this.”

Another OnePlus Nord 2 explodes. The Chinese smartphone maker can’t claim it’s a one-off case anymore. We have previously covered that the recently launched OnePlus Nord 2 blasted, and this is the second time something like this is happening. The user on Twitter who tweeted about this has already deleted both his account and his tweet too.

As the Tweet and account regarding the same have already been deleted, we can’t give any conclusions on what actually happened. The user just tweeted about it and didn’t even attach any images of the phone too.

But we do have the screenshots of the deleted tweet below, so we are attaching them below for readers to have a better overview-

Also, this is not the first time the device has exploded. We recently covered the same thing, the link for which is mentioned below-

We hope OnePlus resolves this issue and it hopefully this doesn’t turn out to be an issue with the phone as there are a lot of people who have already got the device.

Well with that said, do let us know your opinions on this post Another OnePlus Nord 2 explodes. The Chinese smartphone maker can’t claim it’s a one-off case anymore by dropping a comment down below.

One thought on “Another OnePlus Nord 2 explodes. The Chinese smartphone maker can’t claim it’s a one off case anymore”