The Unbiased Blog
Home Reviews Sony WF-1000XM4: Keep getting better with each generation – The Unbiased Review 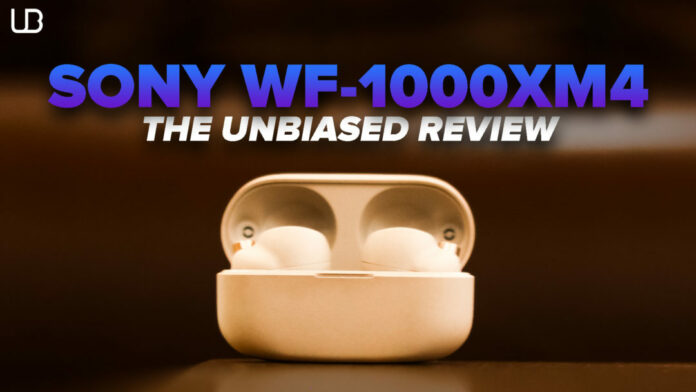 The hunt for picking up the perfect noise-cancelling TWS is a determined piece of work. The true wireless space has evolved a lot in the matter of a few years, there’s always something new to consider in this competitive space. Apple Airpods are the apparent pick for the iPhone users but the space for Android users has more privileges with vast options to choose an audio peripheral for fulfilling their audio needs.

If you’re someone whose priorities are truly inclined towards sound quality and the best noise-cancelling capabilities, Sony is back to turn the heat on with the announcement of the Sony WF-1000XM4 which finally made its giant steps to India. A few weeks ago, we reviewed the Sony WF-1000XM3 and they impressed us a lot in terms of sound quality and ANC but also made some compromises as well which is now resolved with this generation.

After spending nearly two weeks with the Sony WF-1000XM4, let’s witness if they bang for your bucks or not? Before moving towards review, here is a quick look at the specifications:-

The Sony WF-1000XM4 kicks in with a lot of refinements that offer more improved noise-cancellation, better battery life, and some useful software tweaks that are lacking in its predecessor. Sony realized that bearing larger footprints is not a cup of tea for everyone and they shrunk its form factor without compromising on the audio experience. The charging case size is now reduced to 40% which makes it weigh around 41 grams and now tossing them into your pockets won’t seem bulky at all.

This compact form factor also reduces the weight of earbuds up to 10% which makes them fit snugly into your ears. These pill-shaped earbuds are constructed with a solid plastic that is rounder and cuts off all the bulk while compared to its predecessor. With this revamped design, wearing them for longer durations is not a pain in the neck. The golden ring accent is made up of metal which represents Sony’s signature which also sports an outer microphone. The secondary microphone is placed upwards and the third one is placed inwards which is responsible for ANC to take its place.

The large circular panels support gestures that can control your music playback and switch between noise cancellation modes. The built-in proximity sensors on each earbud help the music to pause as soon as they’re removed from your ears. With Sony WF-1000XM4, they are getting rid of silicone and foam tips and adapting to memory foam tips which are flat (not rounded) for a more secure and seal fit. As fit is a subjective topic, we didn’t encounter any issues with the fit of this peripheral. For getting the best fit for your ears, the companion app by Sony can analyze the ears and recommend the ideal choice according to ears. The Sony Headphone app is available for both Android and iOS devices which makes it convenient to use it with any device.

The only omission that Sony WF-1000XM4 holds is the lack of multi-point. The multi-point is a feature in which two Bluetooth connections can be paired. However, Bose and Apple Airpods Pro also lack this feature and only Jabra is the only one who reserves this implementation of multipoint on their audio peripherals. It is available in two colours:- Black and Silber. For conducting this review, we’re using the Silver colourway of it. Sony WF-1000XM4 is a true successor which fills all the gaps which were left by its predecessor. This charging case also supports wireless charging which can juice up with any Qi-compatible pad. However, if you don’t have a wireless charging pad, plugging the USB-C can juice it as well. It also comes up with an IPX4 rating this time to deal with sweat, rain, and water tortures.

Talking about sound quality, The Sony WF-1000XM4 bundles a redesigned 6mm audio driver which delivers a slightly amplified bass, and the treble feels reduced. However, The equalizer settings can be tweaked from the sony companion app as per your taste. The bass is not as thumping as it was on Sony WF-1000XM3 which used to mask out the lower frequencies which is not the case with Sony WF-1000XM4. It even produces abundant level bass thumps that don’t oversize the lows as well.

While listening to songs like On and On by Hocus Focus, mids are pronounced very neatly which makes sure that there is an instrumental separation and clear vocals while listening to music. The highs are crisp not like its predecessor but overall the details in this sound signature are marvellous. While listening to Natkhat by Seedhe Maut, the bass is excessively thumping even though it doesn’t overlap the mids at all. The vocals and instrumental claps sound crystal clear. The microphone quality is much improved than the previous iteration but it’s nothing exceptional. In a home environment, the microphone quality is sufficient for carrying forward a conversation smoothly. While moving outside in a crowded space, the microphone tends to suffer in that scenario.

Talking about noise cancellation, Sony’s QN1e chip is now swapped with its new V1 chip which sets the noise cancellation bars on another level. This pair of earbuds also follows two-sensing noise microphones in each earbud:- a forward and a feed-forward mic just like its predecessor and like the Airpods Pro. The Sony WF-1000XM4 outperforms Bose QuietComfort and Apple Airpods Pro in terms of hushing the ambient background noise well. While riding on a two-wheeler, Sony’s WF-1000XM3 wasn’t able to cancel out the wind noise in such situations which used to be bothersome is now fixed with the entry of WF-1000XM4. Navigate to the Sony Headphones app and turn on the Automatic Wind Noise Reduction which consumes more power but doesn’t sacrifice your music experience.

Unlike the Sony WF-1000XM3, the Sony WF-1000 XM4 supports three audio codecs: SBC, AAC, and LDAC; even Bose Sports QuietComfort lacks the LDAC codec. It relies on Bluetooth 5.2 connection which works pretty well within the recommended range. Just like Apple AirPods Pro, Sony WF-1000XM4 also supports the 360 Reality audio which turns on the spatial audio. The DSEE Extreme is a sound enhancement feature that upscales the low res music with weak bass to sound way better. The Speak-to-Chat feature is a nifty integration that automatically pauses the media and turns on the ambient noise as soon as you start speaking to someone. After the conversation is done and you’re quiet, it automatically resumes media and ANC jumps in. However, if you’re someone who loves to sing while listening to music then it can be troublesome.

The Sony WF-1000XM4 is available in two colourways:- Black and Silver; was announced at a price tag of Rs.24,990 on Sony Official Website whereas it’s also available at an introductory price of Rs.19,999 at Amazon and other portals as well.

At the price of 19,999 INR, the Sony WF-1000XM4 is a masterpiece and launched at the same price at which WF-1000XM3s were announced. It raises a question to the exorbitant price tag which may feel heavy on the pockets, but if your priorities stumble upon an impressive audio experience coupled with undoubtedly the best noise cancellation experience in the space of true wireless earbuds. There are some other hits as well which were missed in the past like IPX4 rating, Sony’s own LDAC audio codec, a lightweight design, and powerhouse battery backup to host off.

There are some misses as well like not-so-stellar microphone quality during calls in dense and louder surroundings, lack of multi-point feature which is not even there in Apple Airpods Pro and Bose QuietComfort, and customizing touch gestures as per your taste which can be a little problematic while you’re driving and want to answer a phone call. Like the Apple Airpods Pro, there are no ecosystem advantages for the Sony devices. If you’re an audiophile who is into amplified bass music, this will be the perfect steal for them. If you’re someone like me who owes WF-1000XM3s, it’s totally worth your penny to upgrade to the Sony WF-1000XM4.

Disclaimer: We tested the Sony WF-1000XM4 for more than two weeks before writing this review. All our reviews are unbiased and are published without the brand getting to read it before you guys. We don’t change our reviews on pressure from brands and that’s the reason we are not sent review units from companies like Samsung, OnePlus, and a few more.