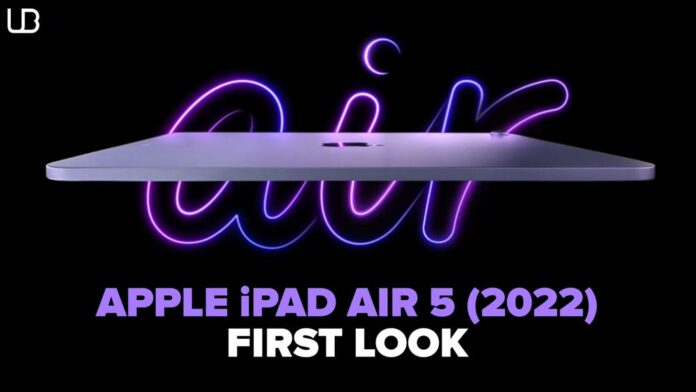 As already mentioned, the new Apple iPad Air 5 (2022) is much better than its predecessor and that’s because it gets a new much more powerful chipset, new display, a bunch of funky colours, and more. What’s interesting is that it now even gets 5G connectivity on some top-spec variants. Apple also claims that it gets improved USB Type-C connectivity and there’s a new front-facing camera as well.

The new Apple iPad Air 5 (2022) is powered by the Apple M1 chipset, the same as the more expensive, iPad Pro model. While most of us assumed it to get the A15 Bionic chip from the iPhone 13, Apple took a giant leap ahead. Apple claims that the M1 chipset makes it more powerful than equivalent Windows laptops at a similar price. In terms of camera specs, Apple has made a big update. It gets an ultra-wide 12 MP front camera with Center Stage tech that automatically pans the screen to include more people during video calls. The new iPad Air 5 also gets stereo speakers, supports peak speeds of up to 3.5 Gbps and comes with eSIM and WiFi 6 support.

Finally, talking about the price, the new Apple iPad Air 5 (2022) is offered in India in two storage variants (64 GB and 128 GB) and two versions (with and without 5G). Prices of the new iPad Air 5 start in India at Rs 54,900 for the WiFi-only model and Rs 68,900 for the WiFi plus  Cellular model. Bookings for the same commenced on March 11 and the deliveries have now also begun for pre-booked customers.

What are your thoughts on the new Apple iPad Air 5? Do let us know in the comments section below. Also, you can connect with us on our social media platforms, The Unbiased Blog, The Automotive Blog, and Nikhil Chawla, for all things tech and auto!