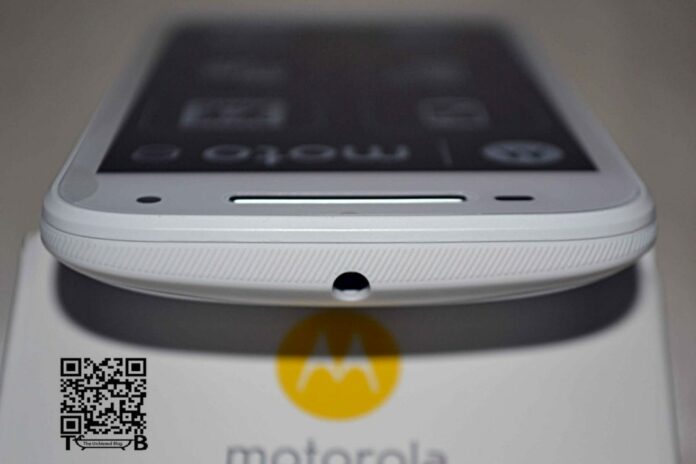 What do you do with a hot selling budget phone to make it even more worthwhile? You bump up everything except the price! That’s exactly what Motorola has done with the 2nd Gen Moto E. The new Moto E gets 4G LTE, a bigger screen, it has gone quad-core, the memory has doubled up to 8GB, a new Adreno 306 GPU, shiny new OS (Android 5.0 Lollipop) and a front facing camera too.

Ok, enough of teasing about the new Moto E, let’s move on to the real thing! But before we start with the review, let’s have a look at the specs of the device:

Like all the other Motorola smartphones, the new Moto E too comes in a compact box with the phone’s image printed on the top . And all the details, specifications, pricing etc on the back and left. Inside the box you will find the device, a charger, regular headset, USB data cable and the usual documents all tucked in together under the device.

What we like about Motorola, is that all it smartphone models have the same quality and design language irrespective of its price, which is really commendable. Same is the case for the new Moto E, you’d notice that the phone matches to its much expensive siblings Moto G (2nd Gen) & Moto X (2nd Gen).

Just like its predecessor, its body is made of tough plastic and the soft-touch matte finish on the curved rear makes it very easy to grip. But that doesn’t make it stand next to the slim phones out there, the Moto E (Gen 2) is bulky and heavy, when compared to the competition. Comparing visually, it has gone bigger and now fits a bigger 4.5inches display; it has lost one of the two metal bars at the front, now with just the one at the top to hide the speaker. On the front you will see an all new front camera, the speaker grille and an ambient light sensor. To get more screen estate, Motorola has used on-screen buttons for navigation, which pop-up as and when needed. On the sides, there is no button on the left side of the device, so the right side gets a textured metal surfaced power button and a shiny surfaced volume rocker. This different textures help users judge which button it is and make is less prone to hit the wrong button accidentally. For a budget phone, it looks and feels pretty good.

The top and bottom get the standard 3.5mm audio jack and Micro-USB port respectively.

Moving on to the back of the device, you will see the good old M(Motrola Logo) dimpled just under the camera. That’s pretty much what you get on the back as the device has no flash, instead you will see a noise cancellation mic next to the camera. Whereas you could change the rear shell on the original Moto E, with this new version you can also change the grippy band that runs around its edge, allowing you to mix-and-match colours and create your own design. And if you look closely you will see a small edge at the bottom left to remove the band.  You’d need to remove the band to access the two Micro-SIM card slots and the microSD card slot on the left side of the phone. That’s all you can access as the back panel is irremovable and so are the other parts like battery under it.

To add more personalisation, these bands are available in a variety of funky colours such as Golden Yellow, Turquoise, Blue, Raspberry, Purple and Red. Moreover, the ribbed texture of the band also helps in gripping the device. At this price point any kind of hardware customization option is a huge welcome.

And now to the Display, the new Moto E gets 4.5 inch display an upgrade from what we saw in the 4.3 inch original Moto E. But as the resolution hasn’t changed, the qHD (540×960) IPS display has a slightly lower pixel density of 245 rather than 256ppi. In fact, the screen is crisp and does a decent job under bright sunlight as well. Thanks to IPS tech the colours are true and viewing angles are good. The Moto E’s screen is now splashproof; it also has an anti-smudge coating and is protected with Gorilla Glass 3. The screen also has an oleophobic coating that supposedly prevents it from attracting smudges, which it actually does to some extent.

The Moto E gets the quad-core Snapdragon 200 clocked at 1.2GHz; the Adreno 302 GPU; Memory stays the same at 1GB, while storage has doubled to 8GB (User available 5.04GB space for apps/ personal storage) which can be expandable up to 32GB via microSD card slot). The overall performance of the device is great at price it comes at. The device has a thickness of 12.3mm and weight of 145g. The smartphone can connect to 3G networks and accepts two Micro-SIM cards.

The device is available in two colour options – Black and White. Now let’s review the Software (UI/UX) of the device.

Like the original Moto E came with latest Android version (Android KitKat), the new Moto E comes with a Lollipop version 5.0 out of the box. That’s a great deal for a budget phone, and apart from that Motorola also guarantees an upgrade to the next version of Android.

Even though the OS would like stock Android to users, Motorola has done some nifty tweaks to the Android 5.0 like –

The new Moto E is a solid performer just like its predecessor but with the topped up specs it gets even better. The benchmark test results shows how it has bumped up the charts:

Overall the performance is steady and you won’t find a lag unless you are opening a really large app/game, but once that loads its fine. You also get a bigger 2,390mAh battery to power the phone but the equalises as now the device has quad-cores and bigger display.

The cameras (Oh yes it’s got a front facing camera now) are not as good what the competition is offering (Read the InFocus M2 3G – The Unbiased Review) but the UI makes up for it. The rear camera is 5Mp with a f2.2 aperture, 4x digital zoom and several features such as a burst mode, auto HDR, tap to focus and quick capture. It also records HD (720p) video at 30fps, and can record  slo-mo video mode. It is definitely an improvement over the Moto E 1st gen but still leaves a lot to be desired in the quality front. Photos captured in good light are decent but its underwhelming in low light/dark as the lack of flash also kicks in.

The camera app comes with a minimalistic design that let’s the user just click without worrying about settings and all. And the ability to quickly launch the camera with a quick double-flick of your wrist, even if the phone is in standby makes it even better.

The photos are good to look at and for sharing on social media sites but lack detail and reveal heavy-handed compression when you zoom in and look closely. Hence producing good enlargements for printing to put on the wall is out of the question. But its still a lot better than the Lenovo A6000. Have a look at the sample pictures below to get an idea:

Talking about the Video recording capability of the smartphone. The Moto E captures 720p HD now but due to lack of any kind of Image Stabilization the videos are shaky.

It was the likes of Moto E that proved to be disruptive for the start smartphone market and changed the game for many other smartphone makers. But things have changed a lot over this one year and to be on the top of the pack Moto E should have got a better camera but apart from that it still rules the market. It has the Motorola trust, better hardware than the competition and the latest Android with the assurance of future OS updates. Like its pre-desessor you can pick up the new Moto E with your eyes shut if you can settle for a just alright camera.

Motorola India released the 4G variant of the Moto E in India. And as there are not many differences in the look and feel of the device we are skipping the complete unbiased review of the device. Instead here is what you need to know about the Moto E (2nd Gen) 4G/LTE variant:

If you would like to add anything else about either the variants then please leave a comment below.

Nikhil Chawla - 8 September 2022
The biggest tech announcement of the year just concluded and boy what a launch event it was by Apple. The announcements were as colourful...