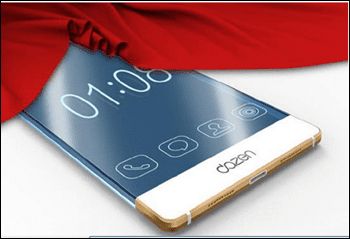 The Dazen X7 packs a 5.2″ FHD display, 13MP f/1.8 rear camera and 8MP front shooter. The phone runs on true Octa-core 1.7 GHz, with 2GB RAM, and 16GB storage, and is powered by a 2700mAh battery, along with extended battery up to 50%. The phone will be available in Gold and Titanium white colours.

On the other hand, Dazen 1 is powered by a 1.2GHz quad-core Qualcomm Snapdragon processor coupled with 2GB of RAM along with 8GB of built –in storage. It sports an 8-megapixel rear camera with a f/2.2 lens and LED flash. It also features a 5-megapixel FF front camera. It is backed by a 2500mAh battery, along with extended battery up to 50%.  The phone will be available in Moon Dust grey and baby snow-white colours.

Dazen X7 and Dazen 1 are competitively priced at Rs. 17999 and Rs. 6999 respectively. These devices will be available in India from June 9 onwards exclusively on India’s largest online marketplace Snapdeal. Registrations for Dazen 1 will open on Snapdeal today. Mr. Li Wang, President and Global CEO, Dazen said, “India has always been a very exciting market and is also the fastest growing online smartphone market in the world and that is why we wanted India to be among the first markets where we would launch our new innovations. We are committed to consumers here and we bring the range of Dazen phones with ground-breaking technology built for India. Dazen will rely on Coolpad’s scale of producing more than 60 million smartphones and more than six thousand technology patents, as well as outstanding internet technology solutions of 360, to become the leading internet company in the world.

Commenting on the launch, Varun Sharma, CEO, Coolpad India, said, “We have entered the Indian smartphone market which has been built for India from a technology and innovation perspective. We are thrilled to announce world debut of our Extended-power technology in India and two ground breaking devices – the Dazen X7 and Dazen 1. These will set the benchmark for LTE devices in India in their respective segments.” Kunal Bahl, Co-Founder and CEO, Snapdeal, said, “We are excited to be partnering with Coolpad as they enter the Indian market and appreciate them picking Snapdeal as the launch platform given our growing dominance in the smartphone category in e-commerce in India. We are confident their maiden launch in India will be a big success and we will see a tremendous response from consumers towards this launch. Coolpad is renowned for innovation and feature packed smartphones that provide a great experience to users. We look forward to working alongside the Coolpad team to make it the most sought after smartphone brand in India.”