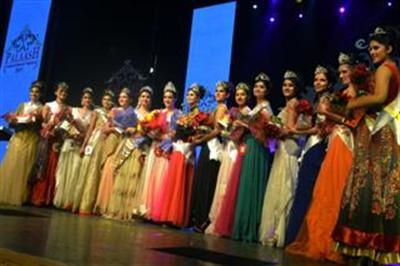 The six-month long hunt for India’s next supermodel ended with a glittering and unforgettable event at the Kingdom of Dreams in Gurgaon on Wednesday with Chandigarh girl Ms Aittal Khosla winning the coveted title of Miss Palaash 2015 in front of a packed audience.

The 19-year-old Aittal was chosen from among the 26 finalists who were shortlisted after a 15-city audition held across the country earlier this year. The other winners of the evening were Ms Niharika Dholua from Guwahati who was named first runner-up and Ms Neha Dabar from Chandigarh who was selected as the second runner-up at the event. The winners were crowned by the beautiful Bollywood diva Mugdha Godse who shared the stage with the senior management of Panache Global Pvt Ltd, the parent company behind the Miss Palaash event.

Speaking to media post the announcement, Ms Pallavee Sharma Chairperson and Managing Director of Panaash Global Pvt Ltd said, “We are elated to announce the winners of our first edition of Miss Palaash. We have received tremendous response from the people for the event and we believe this is only going to grow in scale in the future. The idea behind the event was not only to honour the Indian women but also to encourage them in their various endeavours and talents. We worked in sync on the ideology of our Global Leader and Eminent Prime Minister Shree Narendra Modi Ji to promote Swach Bharat Abhiyaan by making our girls getting associated in the mission for a better India.”

Praising the talented participants Bollywood actress and modeling superstar Mugdha Godse said, “I would like to congratulate the winners and all the participants who showed the determination and perseverance throughout the competition. It is a matter of delight that Indian women are becoming more confident and coming forward in all the avenues and do not deter or shy away in showcasing their talents.”

Mr Inderjeet Singh Soni, Executive Director, Panache Global Pvt Ltd, “For us this has been one of the most overwhelming experiences. Throughout the event we were amazed to have come across such diverse forms of beauty and talent. We would like congratulate the winners and would hope that they treat this achievement as a stepping stone for future success. We worked in sync on the ideology of our Global Leader and Eminent Prime Minister Shree Narendra Modi Ji to promote Beti Bachaao , Beti Padaao as we want to add a new definition and angle of Indian-ism to the word of Glamour and Fashion”