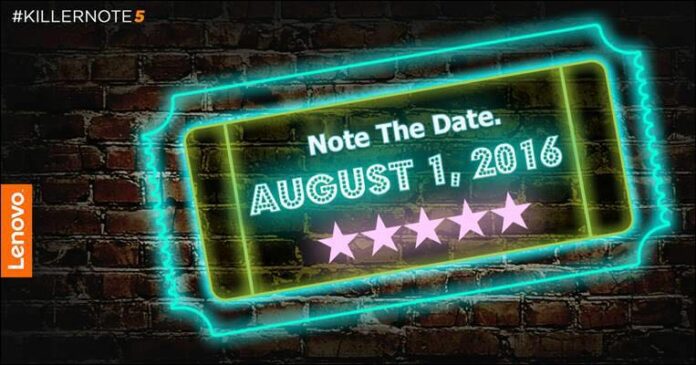 Lenovo launched K3 Note in India in 2014 and it was one of the best value for money smartphone then and fast forward to 2016 Lenovo announced K4 note in January, also recently they also announced Wooden variant of K4 Note for INR 11,499. The the company is all set to launch K5 Note in India on August 1st.

Is the private theater experience really about having your own theater? Or is it more? Watch & find out #KillerNote5https://t.co/kR6qMIGRHf

Lenovo also tweeted and said “You don’t have to worry about a ‘house-full’ when you have the best seat in the house. The #KillerNote5 is coming.” Lenovo k5 Note was launched in china early this year, just some weeks after they launched K4 Note here in India. There is no much improvements from K4 Note, It comes with a  all-metal body design. K5 note packs in a 5.5″ Full HD display, MediaTek Helio P10 processor, 2GB RAM, 16GB ROM and sd card support, There’s a 13MP rear snapper with PDAF autofocus, f/2.2 aperture and an 8MP front-facing camera. All the above specs are for Chinese Variant, Indian variant may have some changes.

Also there will be support for TheaterMax technology, and would be compatible with the ANT VR headset. Price of the device in china is CNY 1,099 (approx. Rs. 11,000) and we wish Lenovo will bring price down or improve the specs of Indian Variant.