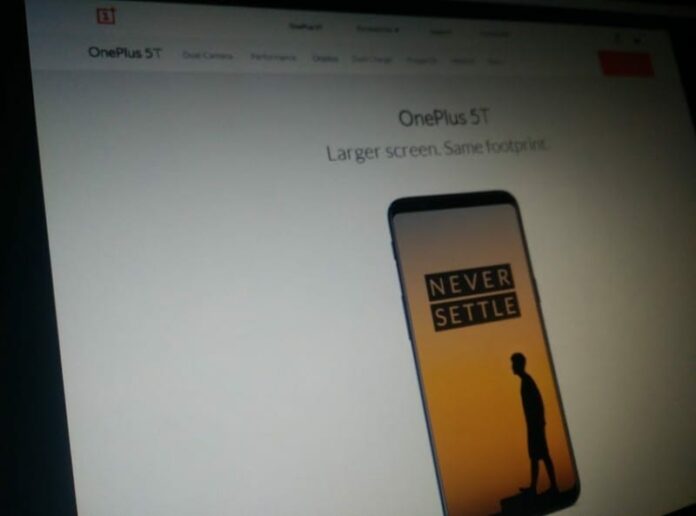 The OnePlus 5T rumour mill is buzzing on social media at the moment due to the leaks of the images on Twitter from Jacky_Tech handle.  The tagline of the OnePlus 5T says “Large screen, Same footprint”, that means the 5T will come with the same dimensions as the OnePlus 5 but with a large display, speculated to be a 6-inch screen because of the 18:9 aspect screen ratio. It seems like most of the features and specs will remain unchanged, similarly like the OnePlus 5, except the fingerprint scanner, which will be moved to the back of the device as it houses a full-screen display. Apart from that, the resolution on the 5T will be a Full-HD+ and not QHD, this time around.The camera department should also be the same as seen on the OnePlus 5. Although, there might be an updated camera software for a better picture clarity. As the leaks suggest, the best part is that the OnePlus 5T is expected to come with Android v8.0 Oreo and might also increase the battery capacity.

3 additional photos I took of the #oneplus5T They are not that good but it is what it is😉 #OnePlus #OnePlus5 #leaked pic.twitter.com/8PQ5r2pSRN

The OnePlus 5T is expected to launch in November.  These are just speculations for now. Only time will tell what will come out of the mystery box at the launch? What do you think about the OnePlus 5T as of now? Leave a comment below and let us know. Follow us on Twitter for more news and updates.