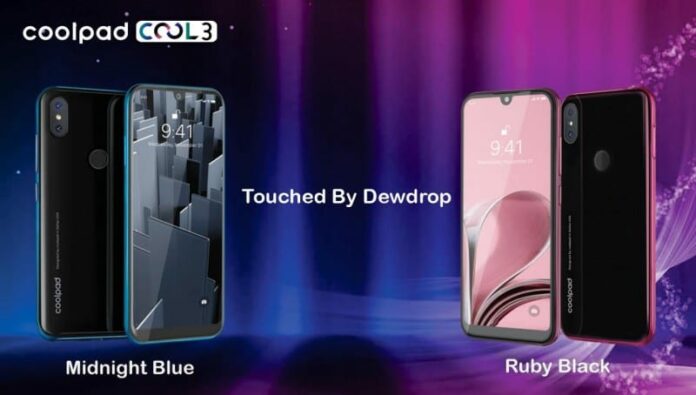 Coolpad has announced a new budget smartphone here in India today. The new Coolpad Cool 3 is direct competition for the Redmi 6A also for Realme C1. As we had reported earlier, the smartphone is priced under INR 6,000 and comes with a dew-drop notch up front and also it is running on Android 9.0 Pie. The device is also available in gradient color options.

The company’s first smartphone to come with a dew-drop notch, the Coolpad Cool 3 features a 5.71-inch (1520 X 720) HD+ IPS display with 90% screen-to-body ratio. Under the hood, the device is powered by an Octa-core Unisoc processor clocked at 1.3GHz, the chipset supports AI as well as AR/VR. The device comes with 2GB of RAM, 16GB of storage with microSD card support up to 128GB. It is packed with a 3000mAH battery and is running on Android 9.0 Pie, as said earlier. 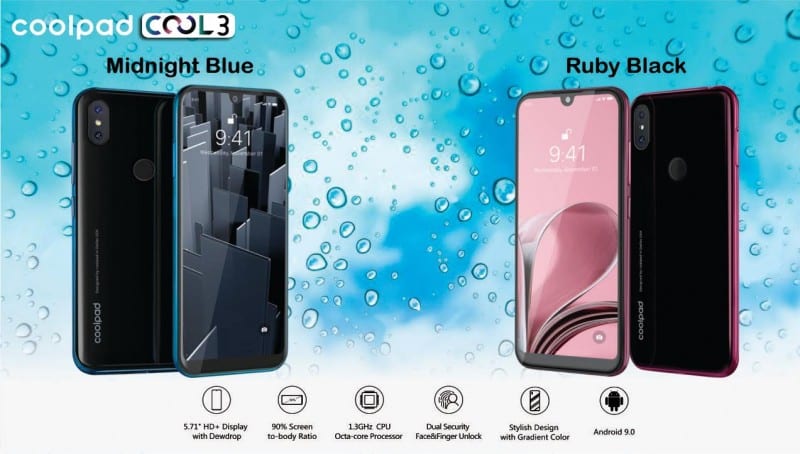 On the camera front, the device comes with an 8MP primary rear camera along with a 0.3MP secondary shooter with LEd flash. It features a 5MP front-facing camera with multiple beauty levels. The fingerprint scanner is present at the rear of the device and it also supports face unlock, giving the users a choice to choose the way they unlock the phone. Other features of the device include 4G VoLTE, Wi-Fi 802.11 b/g/n, Bluetooth 4.1, and GPS.

The Coolpad Cool 3 is priced at INR 5,999 and is available in Midnight Blue, Ruby Black, Teal Green, and Ocean Indigo gradient color options. The device can be purchased from online as well as offline retail stores.

Speaking at the launch of Coolpad Cool 3, Mr. Fisher Yuan, President, Coolpad Group and South Asia said, “Coolpad is set to disrupt the budget smartphone segment in India with a stylish design, stunning specs along with superb quality. We are looking forward to offering our consumers a delightful experience and we will launch a range of affordable smartphones this year to build our presence in India.”