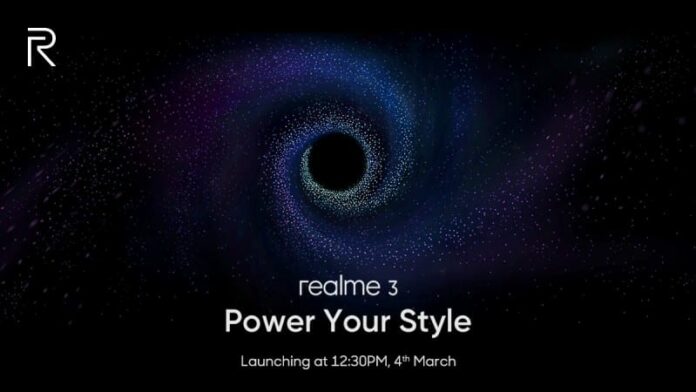 After a series of teasers, Realme has announced the launch date of their next budget smartphone, Realme 3. The Realme 3 will be launched in India on March 4. The company has revealed the launch details on the social media platform with “Power Your Style” tag line.

The Realme brand arrived in India last May with the launch of Realme 1 as a sub-brand of Oppo and later on became an independent brand. The company has now totally launched five smartphones, including the latest selfie-centric smartphone Realme U1.

The company has posted an image of the upcoming Realme 3 which reveals that the smartphone will come with a vertical dual rear camera setup, instead of the horizontal setup with an LED flash as compared to its predecessor Realme 2 and 2 Pro. Also, we can see the fingerprint scanner present at the rear of the device. Also, the Realme 3 is expected to come with a diamond cut design as seen on the Realme 1 and Realme 2. The Realme 3 will most likely be powered by MediaTek’s Helio P70 processor. The Helio P70 is built with TSMC’s 12nm FinFET technology and features a multi-core APU operating at up to 525 MHz. It is packed with four Arm Cortex-A73 2.1 GHz processors and four Arm Cortex-A53 2.0 GHz processors in an octa-core big.LITTLE configuration. For an additional power boost, the chipset has an improved Arm Mali-G72 MP3 GPU operating at up to 900 MHz, which provides a 13% performance improvement compared to the Helio P60. The Helio P70’s AI engine delivers a 10-30% AI processing boost compared to the previous gen. The SoC is built on MediaTek’s NeuroPilot platform which supports common AI frameworks, including TensorFlow, TF Lite, Caffe, Caffe2, and custom third-party offerings.

The Realme 2 was launched for a starting price of INR 8,990 back in August 2018 and we expected the Realme 3 also to be priced under INR 10,000 for the base model. We should know the exact pricing of the Realme in a couple of weeks when it will be officially launched in India.