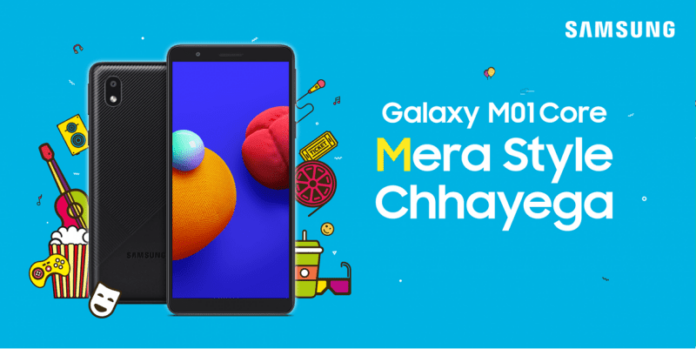 As far as the specifications are concerned, the Samsung Galaxy M01 Core packs in a 5.3-inch HD+ display with a 3000mAh battery for “long-lasting usage of up to 11 hours”. The smartphone is powered by a quad-core Mediatek 6739 SoC and is available in two memory variants. The phone is quite slim measuring at 8.6mm and retails in three colours namely: Black, Blue and Red. On to the optics, the Galaxy M01 Core has an 8-megapixel rear camera and 5-megapixel selfie camera for photographs.

This is a third addition to the Galaxy M lineup after Galaxy M01 and the Galaxy M01s below the Rs.10,000 price bracket. The brand also claims that the “Galaxy M01 Core will ensure easy access to technology for first time smartphone users.” and will be available across a large distribution network in India to make the M01 Core available across every nook and corner of the country.

The smartphone also features several ‘Make for India’ features which would help users transition from feature phones to modern-day smartphones. Sporting an intelligent screen, with dynamic screen timeout, ‘Intelligent Inputs Smart Paste and Suggest Notification’ for extended run time and more. The smartphone runs on the latest Android Go platform, with a lightweight OS and application to make the most out of a quad core processor.

The Samsung Galaxy M01 Core will all be available across Samsung’s retail stores, Samsung.com and all major leading online portals from July 29 onwards. Priced at Rs.5,499 for the 1GB +16GB variant and Rs. 6,499 for the 2+32GB, the phone retails in three colours Black, Blue, and Red.

What do you guys think of the new Galaxy M01 Core? Do let us know by dropping a comment below or tweet to us @theunbiasedblog