The Unbiased Blog
Home News Tech Samsung Galaxy F62 to come up with a 64-megapixel camera according to... 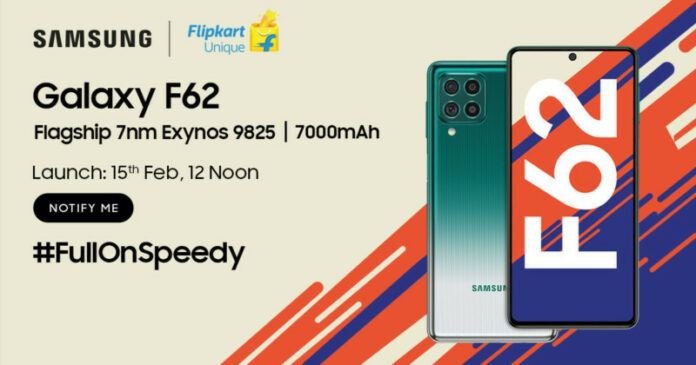 Samsung Galaxy F62, which is launching on the 15th of February, is knocked to come with a 64-megapixel camera. This can be verified by its promo page on Flipkart, which reveals a lot about this phone. Samsung has also teased the specifications of the phone, a bunch of times.

This phone could be priced near to the Rs. 20,000 and Rs. 25,000 price segment. This phone will be the additional phone, as they had already launched the first phone in this lineup which was the Samsung Galaxy F41 in October of 2020.

There is already a dedicated promo page for the phone on Flipkart, and it has teased a lot of aspects about the phone. According to it, this could feature a 64-megapixel camera, out of the other 3 cameras on the back. It was already confirmed that the phone would have a hole-punch cutout for the selfie camera. Also, a huge 7,000mAh battery that is even bigger than the one on Galaxy M51. For the display, it would come with a Super AMOLED display and the 7nm Exynos 9825 processor with the Mali G76 GPU will be powering it.

Well with that said, do let us know about your opinions on this phone, by dropping a comment down below.