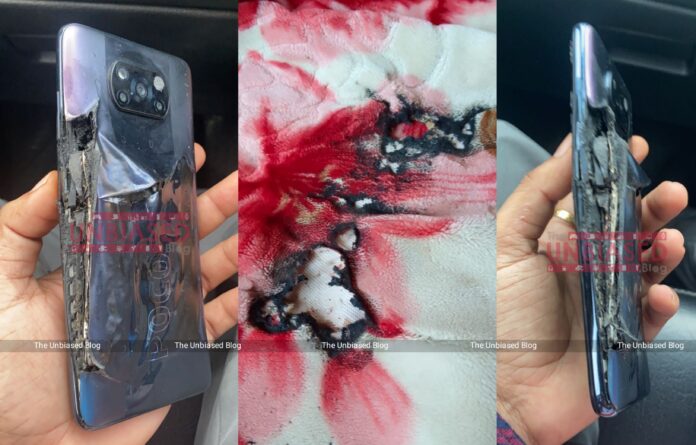 Another Poco X3 Exploded reported by a Twitter User. A Twitter user has shared this where according to him, the device blasted while charging. Also, this is not the first time, this device has blasted. While there has been no official statement by the brand yet, we expect them to response soon, and if they do, we’ll update this post.

Also read, Realme Cobble Bluetooth Speaker Leaked Ahead of Launch; Could launch for under Rs.2000

In April of this year, there was another Poco X3 blast reported and the company even gave a statement saying that it happened due to external pressure. More information about which can be found here-

As for the current blast situation, the Twitter user whose device blasted says, “I just bought the phone 2 month ago and look at this phone got blast while charging shame on uh poco and mi and if uh can not replace this phone I will file case against you”

The user has even shared the images and we have attached the Tweet for a better overview. As you can see, the device is a Poco X3 and it seems to have blown away the Back panel of the device. There also have been some burns to the area where the device was charging.

As for the specifications of this device, the Poco X3 was launched on 22nd September last year sold very well. The device got multiple sales too, and currently, it sells for Rs. 14,999. It comes with a 6.67” FHD+ Display and a 120Hz refresh rate too. The touch sampling rate is 240Hz which makes the display very smooth. Under the hood, it comes with the Snapdragon 732G which is an Octa-Core chip clocked at 2.3Ghz and comes with the Adreno 618 GPU.

There is a big 6000mAh battery in the phone and for charging, the phone comes with a 33W fast charger. This charger would help the device for charging the big battery faster. In terms of optics, the phone comes with a Quad Camera Setup with the main sensor being a 64mp Sony IMX 682 sensor and we also get a 13mp Ultra-wide camera with 2mp macro and 2mp depth cameras. In the front, we get a 20mp camera which is a punch-hole camera.

This is what @IndiaPOCO claims!

A lot of you suspected that it’s the customer’s fault like always. So we decided to investigate and spoke to @Ammybhardwaj13. And he has denied all the allegations that the phone was damaged or had a dent. #Poco has also promised him a new phone. https://t.co/MwoNu40zsI pic.twitter.com/IAblXUIZwe

So we decided to investigate the matter and called the customer and he has denied all the charges by Poco India. We at The Unbiased Blog are here for our readers, viewers and followers.

Here is our telephonic conversation with the user Ammy Bhardwaj (twitter.com/ammybhardwaj13) where he has clearly said that it wasn’t his fault, also that Poco India has promised him a new device and also requested him to delete the tweet.

Well with that said, do let us know your opinions on this post Another Poco X3 Exploded reported by a Twitter User by dropping a comment down below.