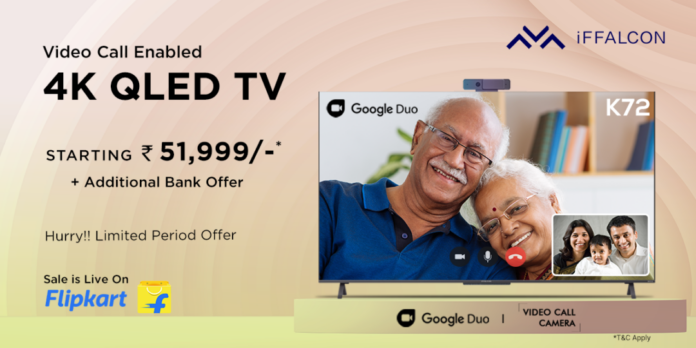 iFFALCON launches K72 Television with a Video Calling Camera in India. This new TV includes the new video calling enabled 55-inch K72 which is priced at INR 51,999. The TV features a camera that allows the users to take and make video calls through their TV via the Google Duo app. The maker has revealed many details about the new model too.

Speaking on the launch Mike Chen, General Manager, TCL & iFFALCON India said, “We have been using the latest technology in our TVs and have been focusing on targeting the Indian consumers. The new iFFALCON K72 will revolutionize the TV viewing experience of the users by adding more comfort to their lifestyle. The K72 also sports a user-friendly smart interface that will offer cutting-edge intelligent functions. He also claimed that the iFFALCON K72 would be the country’s first TV that will be powered by the latest Android version.”

As for what the TV offers, it sports Dolby Vision, Dolby ATMOS, Android(R) 11, AIPQ Engine, HDMI ports, Dual-band WIFI, MEMC, and many more advanced features offering the most immersive and enjoyable user experience. It is also equipped to upscale and reproduce low-quality images to 4K visuals. The TV is also supported by the latest version of Android that is Android 11.

The iFFALCON K72 even features AIxIoT which enables the users to use their smart TV more conveniently. The maker says that it offers the users the flexibility to control all their smart home appliances with the help of their TV without any hassle. The users also have the ease to control their TV through voice commands without using the remote.

Well with that said, do let us know your opinions on this post iFFALCON launches K72 Television with a Video Calling Camera in India by dropping a comment down below.