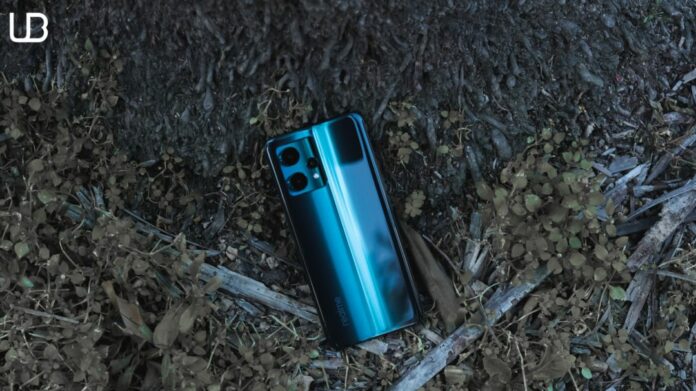 Realme and Xiaomi are competing head to head from IoT devices to smartphones. In January, Realme announced its Realme 9i which defends the mid-range category and within a month, they’re back with the Realme 9 series. Which adds two new smartphones into its portfolio, Realme 9 Pro and Realme 9 Pro+.

This ‘Pro+’ moniker is an answer to throwing one’s hat in the ring against the Redmi Note 11 Ultra. The Realme 9 Pro+ adds a colour changing glass back, Sony IMX 766 camera sensor, MediaTek Dimensity 920, a 90hz AMOLED display, supports 60W Fast Charging and the fingerprint sensor also doubles up as a heart rate sensor. Tempting spec-sheet, Right?

With this device, Realme also increases its price a bit higher to be in the same segment as the OnePlus Nord 2 and Xiaomi Mi11i HyperCharge.

So does Realme 9 Pro+ stand out from the competitors? After using this device as our primary device for almost two weeks. Here’s our review of the Realme 9 Pro+. Before proceeding towards the review, here’s a sneak peek at the specifications.

The Realme 9 Pro+ doesn’t receive a major foothill in terms of design and looks very identical to Neo 2. Meanwhile, it’s Realme’s first time with a colour-changing rear panel just like the Vivo V23 Pro. Cough! Cough! This ‘Light Shift’ technology is only limited to its Sunrise Blue colourway which switches its colour from light blue to coca-cola-ish red. However, we got its ‘Aurora Green’ colourway which turns out into a sparkle-like effect that resembles a group of stars as soon as sunlight strikes on it.

This back panel is slightly curved for better ergonomics and has a high gloss finish which attracts fingerprint smudges on it. With a slim profile of 7.99mm and a weight of around 182 grams, it feels remarkably lightweight during in-hand operations. The central mid-frame is made of plastic with the corning gorilla glass in the front and the protection isn’t mentioned for the back glass yet. The haptic motors are extremely good as I’m someone who needs vibration feedback while typing, they stood out well.

To the physical overview, it flanks volume rockers and SIM tray slot on the left and a power button on the right which delivers pretty tactile feedback. On the bottom, there’s a standard USB C Port, Headphone jack, secondary microphone and a mono speaker whereas, on the top, there is a primary microphone. The in-display fingerprint scanner also doubles up as a heart rate sensor where I can’t vouch for accuracy and reliability.  Realme 9 Pro+ bundles a 6.4-inch AMOLED display that feels compact from its rivalry i.e, Xiaomi 11i HyperCharge. However, the refresh rate is limited to 90hz whereas the competition is far away with its 120hz display panels. This display reproduces punchy colours which look pleasant to the eyes. Realme claims that it pushes out a peak brightness of up to 1000 nits which ensures good visibility under harsh sunlight. The bottom chin is a little thick and does not suffice for everybody’s taste.

The In-screen fingerprint sensor is reliably fast and also doubles up as a heart rate monitoring sensor. This feature can be accessed in Realme Lab which reflects the results by scanning the fingerprint sensor where accuracy might be a concern and is not reliable at all but a nice feature to flaunt off. It comes with three colour profiles:- Vivid, Natural and Pro Mode. However, we’ll recommend switching towards ‘Pro mode’ and toggling the ‘Brilliant’ for a better colour reproduction experience. To sum up, the display on the Realme 9 Pro+ is not its strong department to clash with the competitions.

The Realme 9 Pro+ is powered by the Mediatek Dimensity 920 which is based on 6nm technology, an upgrade over last year’s, including the competition Qualcomm Snapdragon 720G SoC. Hence, it directly competes with its rivalry:- Xiaomi Mi11i HyperCharge, this chipset isn’t slouched but it isn’t a flagship killer either. In day-to-day usage, there aren’t stutters while navigating into the UI and the experience was pretty fluid and fast. While pushing the limits, the device heats up little but never feels uncomfortable while using it for prolonged gaming sessions. Coupled with two RAM configurations:- 6GB and 8GB RAM and up to 256GB of UFS 2.2 storage. Yes, A UFS 2.2!

As far as gaming sessions are concerned, we were able to clock BGMI at HDR graphics at Ultra frame rate and it managed the frame rates constantly between 37-40FPS. Meanwhile, we didn’t encounter any slowdowns or lags during our gameplay. If you’re a COD Mobile Guy, it maxes out the graphics at high settings and frame rate at very high. As far as benchmark scores are concerned, it scores 507023 on Antutu Benchmark, 814 in Single-Core Score and 2322 in Multi-Core Score on Geekbench 5. In the CPU throttling test, it throttled to 90% to its max performance. CAMERA  For justifying this ‘Pro+’ moniker, Realme kicks upgrades its camera setup with the Sony’s customized IMX 766 50 MP Primary camera accompanied by an 8MP Ultra-wide angle lens and a 2MP Macro sensor.

Pictures that are captured from the primary camera sensor hold slightly warm tones and sharp details and edge detection whether it’s human or object is on point. It manages dynamic range pretty well with a presence of noise reduction which is often called the oil-pastel effect which is evident in it. The highlights and shadows are bright and consist of a lot of details in good lighting conditions which usually smartphone lacks in this price segment. This oil pastel effect is also present in the shadows and the highlights during low-light and indoor scenarios. Moving onto the low light scenario, this camera captures bright pictures with grainy shadows and a lack of details. All thanks to built-in OIS present in Primary Sensor but due to slow shutter count in low light, it fails to capture moving objects and produces a totally washed out and weird heal effect which is irksome.

The Ultra-wide angle lens is nothing extraordinary, it reproduces ample amount of detail in daylight situations which is tinted towards cool tones. The edge distortion is mostly there in devices at this price tier and it usually struggles in low-light scenarios. The other 2MP Macro comes with a fixed focus point which makes it impossible to set the focus on the object. Due to that, we always recommend using a Primary Camera Sensor for taking close-up shots and later cropping it for your desired look. Moving towards video recording capabilities, Realme 9 Pro+ can shoot up to 4K resolution which is limited to 30FPS and ultra-wide angle lens is restricted to 1080p resolution with 30FPS. The 16MP selfie shooter captures nice selfies with adequate face details and the edge detection on portrait mode is on-point. To sum up, this camera department is not the best but it’s quite improved while looking at the Realme GT Master Edition and Realme GT.

The Realme 9 Pro+ runs on Realme UI 3.0 which is running on Android 12 out of the box bundled up with plenty of customizable options to choose from. During our time spent with the device, it was light on its feet and never felt sluggish throughout our multiple sessions from gaming or social media surfing. There’s a dual audio mode which is a very nifty implementation that delivers audio output through a Bluetooth audio peripheral as well as wired audio peripheral at the same time which can be useful for binge sessions. However, I didn’t appreciate the sheer amount of bloatware that was installed on the device but at least it won’t bombard your notification shade with some filthy notifications.

That said, it packs in a 4500mAh battery which easily lasts up to a day on moderate usage which includes watching Netflix, playing games, capturing photos and browsing social media apps like Twitter and Instagram. However, the battery status can differentiate during hardcore gaming or shooting videos. It supports 60W Fast Charging although it ships with a 65W charging brick in the box which can top-up the battery from 0%-100% within 70 minutes which lessens one’s speed with the 120W HyperCharge technology by Xiaomi.

With the introduction of Realme 9 Pro+ this year, Realme is trying to improve its camera game for which people criticized the Realme GT Neo 2, Realme GT 5G and Realme GT Master Edition including us. For delivering a good camera experience, they’d have to do some compromises on the material used in the back panel and the choice of adding an underpowered MediaTek Dimensity 920 for this segment performs well but it’s not exciting as much as the Realme GT series. The display experience is also compromised by the lack of HDR certification and implementation of 90Hz on this display panel.

Realme 9 Pro+ delivers a fluid and snappy experience and feels quite compact during in-hand operations which are coupled with decent battery life, a great camera experience of around 6 hours of SOT and fast charging which juices the smartphone in 70 minutes. However, it’s difficult to recommend it while looking at the competitors right beside it. The Xiaomi 11i Hypercharge has a blazing fast 120W Fast Charging which looks and delivers more tempting results onboard. If performance is your utmost priority, you can consider Realme GT Neo 2 or the OnePlus Nord 2 which ships with Mediatek Dimensity 1200.