The Unbiased Blog
Home News Everything Apple announced at its Far Out event – iPhone 14 series,... 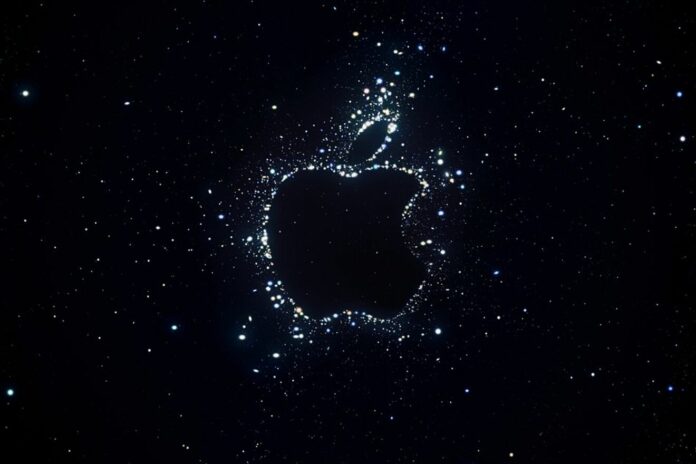 The biggest tech announcement of the year just concluded and boy what a launch event it was by Apple. The announcements were as colourful and vivid as the photos of the rainbow shared by Tim Cook from the Apple Park just before the launch.

As expected we got 4 new iPhones but there was a twist, the Mini is gone and the Plus moniker makes a comeback. To all those who loved the small form factor of the iPhone Mini, go and buy the iPhone 13 mini till stocks last. And if you are someone who always wanted a bigger Pro Max size iPhone but didn’t want the Pro Max features or price then the iPhone 14 Plus is that iPhone you always wanted.

The entire iPhone 14 lineup introduces groundbreaking safety capabilities that can provide emergency assistance when it matters most. With a new dual-core accelerometer capable of detecting G-force measurements of up to 256Gs and a new high dynamic range gyroscope, Crash Detection on iPhone can now detect a severe car crash and automatically dial emergency services when a user is unconscious or unable to reach their iPhone.

The iPhone 14 will have a 6.1″ display, while the iPhone 14 Plus display will come with a 6.7″. Both will run the A15 Bionic chip first seen in last year’s iPhone 13 Pro. There’s a 12MP rear camera with a larger sensor on the back, while the 12MP front facing camera is gets a new auto-focus system for better selfies.

iPhone 14 and iPhone 14 Plus will be available in midnight, blue, starlight, purple, and (PRODUCT)RED in 128GB, 256GB, and 512GB storage capacities.

In addition to the iPhone 14 and iPhone 14 Plus, Apple updated its pro lineup. The biggest change in iPhone 14 Pro and iPhone 14 Pro Max design is at the top of the screen. Apple has dropped the notch and replaced it with what they calls the “Dynamic Island”. 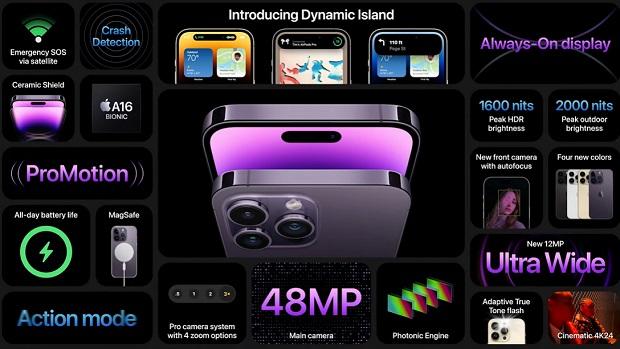 The iPhone 14 Pro uses a new system on a chip, the A16 Bionic with a 6-core CPU and 16 billion transistors. There are two high-performance cores and four high-efficiency cores. Apple uses a 4 nanometer process. The A16 Bionic can compute 17 trillion operations per second. The display engine has been updated, which enables the always-on display.

The iPhone 14 Pro has a 48 megapixel camera with a quad-pixel sensor. It is a 65% larger sensor compared to the iPhone 13 Pro. It also features a new 24 millimeter focal length.

There are now four modes when you shoot a photo — an ultra-wide mode, 1x mode, 2x mode and 3x mode. But there’s a trick. The 2x mode is not optical. The company uses the 1x sensor and keeping the middle of the photo for a 2x zoom. The new ultra-wide camera is a 13mm camera in focal length. It has an aperture of f/2.2 with a macro photography mode.

The big additions to this upgraded version include a new temperature sensor focused on women’s health, a crash detection feature, a new low-power mode option and international roaming.

The Apple Watch SE 2nd generation, is available in Silver, Midnight and Starlight.

The Apple Watch Ultra has been specifically designed for intense sports tracking. It is a larger model with better battery life. It also has a different body that should resist extreme weather conditions. Apple also announced the second generation of AirPods Pro. They come with a new H2 chip, including major upgrades to Active Noise Cancellation and Transparency mode — while also offering a unique way to experience Spatial Audio that’s even more immersive. Now, users can also enjoy Touch control for media playback and volume adjustments directly from the stem, along with longer battery life, a brand-new charging case, and an additional ear tip size for a better fit.

So do share your thoughts on the latest launches by Apple in the comments section or tweet to us @theunbiasedblog or @nikhilchawla.