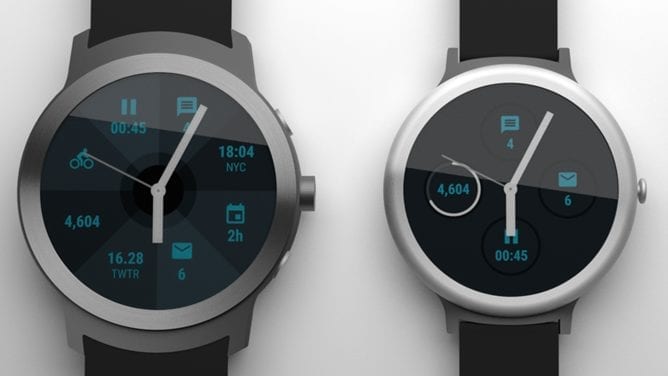 Google’s Android Wear is just over 2 years old and till now we have seen a quite a few smartwatches from makers like – Moto, LG, Asus, Huawei and others. Now according to a report by Android Police, looks like Google is working on its own Android Wear watches. The 2 Android Wear smartwatch’s are codenamed as Angelfish and Swordfish.

Last week images of the 2 rendered online and here is what it looks like(below image). Angelfish is the larger of the two smartwatches and is which has a large crown button and two small buttons on either side of it.  The watch face looks like a new iteration of Google’s new customizable faces in Android Wear 2.0. As per earlier reports, Angelfish will be a sporty variant. It will supposedly have a 43.5mm diameter, 14mm thick and support LTE, GPS and heart rate tracking. Swordfish is the smaller variant of the two and it has a simple and slimmer design. It sports a curved bezel with a small crown button on the right. The watch also has a black gap between where the watch body ends and where the visible display area begins. It has diameter of 42mm and a thickness of 10.6mm and will reportedly come in silver, titanium, and rose gold options.

Still there is no info on the Brand on the Smartwatch and we can expect this to to launched along side the 2 new Nexus smartphones codenamed Marlin and Sailfish. Both the Smartwatches are expected to arrive with Android wear 2.0, which was announced at Google i/o 2016. Here are some of the features of Android Wear 2.0 –