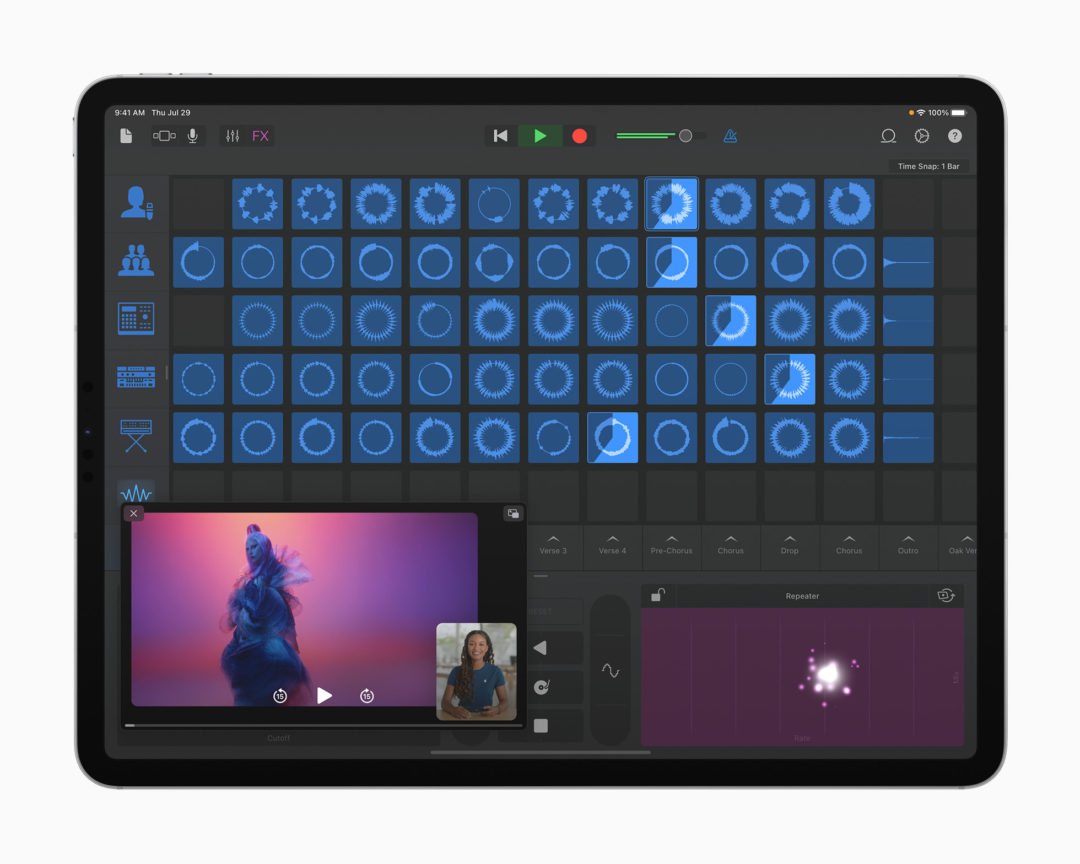 Apple’s GarageBand, the most popular music creation app in the world for iOS and iPadOS, now helps people unlock even more of their musical creativity with all-new Sound Packs from some of today’s top artists and producers. For the first time, users can learn the art of remixing right within the app with two all-new Remix Sessions offering step-by-step video instruction and featuring hit songs from Grammy Award-winning artists Dua Lipa and Lady Gaga. Musicians can also now create songs with seven new Producer Packs full of beats, loops, and instruments created just for GarageBand by some of the world’s top producers, including Boys Noize, Mark Lettieri, Oak Felder, Soulection, Take A Daytrip, Tom Misch, and TRAKGIRL. An additional Producer Pack provides a special companion experience to the new Apple Original docuseries “Watch the Sound With Mark Ronson,” premiering Friday, July 30, on Apple TV+, enabling viewers to experiment with sounds inspired by the music featured in the show.

All-new Remix Sessions and Producer Packs are available starting July 29 as a free download from the Sound Library in GarageBand 2.3.11, the latest version of the app, for iOS and iPadOS.

“GarageBand continues to be a catalyst for music creation — making it easy for novices to get started and for seasoned pros to develop their ideas on the go,” said Bob Borchers, Apple’s vice president of Worldwide Product Marketing. “For this update, we’ve collaborated with an incredible group of artists and producers to give musicians an amazing collection of new sounds to play with, and we hope even more people will be inspired to tap into their creativity and start making music in GarageBand.”

Art of the Remix with Dua Lipa and Lady Gaga

Anyone can now develop their remix skills in Apple GarageBand with two new in-app Remix Sessions featuring Dua Lipa and Lady Gaga. Each session includes inspirational videos from each artist telling the stories behind their hit songs “Break My Heart” (Dua Lipa) and “Free Woman” (Lady Gaga), as well as step-by-step remix instructions led by an Apple Retail Creative Pro using a GarageBand Live Loops version of each song.

During these sessions, anyone can interact with these hits just as an artist would in the studio, hearing isolated vocals, beats, and individual instruments that provide the foundational elements of a song. With touch instruments and thousands of Apple Loops available in GarageBand, users can let their creativity run wild, taking their remix in any direction from Hip Hop to EDM, or any combination of sounds they dream up.

Dua Lipa, artist: “It’s amazing to see Apple bringing my music to life in GarageBand, so now anyone can experience how I made ‘Break My Heart’ no matter where they are. Music has the power to bring people together, and this is doing that in such an exciting way. I personally can’t wait for people to have a lot of fun experimenting and coming up with different versions of my song.”

Lady Gaga, artist: “GarageBand is my idea bank and where I start my songwriting, so I’m excited to make my song ‘Free Woman’ available as a Remix Session. I want musicians and music lovers to be able to see how a song is produced and be able to hear all the individual parts, and then put their own creative colour on it, doing whatever they want in GarageBand.”

Musicians can now create their own songs with help from some of today’s biggest music producers, using seven new downloadable Producer Packs created for GarageBand by Boys Noize, Mark Lettieri, Oak Felder, Soulection, Take A Daytrip, Tom Misch, and TRAKGIRL. Each Producer Pack is bursting with hundreds of royalty-free loops, beats, instruments, drum kits, synth patches, and samples that embody the sound and vibe of each producer. And in-app videos feature each producer offering words of encouragement to beginners, as well as insights into their creative process.

Oak Felder, producer (Ariana Grande, Demi Lovato, John Legend): “Whenever someone asks me how to start producing and making beats, I tell them to grab their iPhone and open up GarageBand. It removes all the technical obstacles and makes it easy to turn a simple musical idea into something great. I still use GarageBand to sketch out ideas, so it’s especially cool to be able to deliver my own selection of royalty-free sounds to help someone else write their own hit song.”

David Biral and Denzel Baptiste, Take A Daytrip, producers (Lil Nas X, Kid Cudi, Travis Scott): “We both got our start using GarageBand, met to form Take A Daytrip, and added Logic Pro to our production tools. Our new Producer Pack is a personal collection of signature sounds created from our favourite synths and gear so that we could always have access to them whenever we’re away from our studio. Our goal is always to make technology more accessible for the next generation of producers and artists. Making our own sounds for GarageBand is a perfect way to pay forward the inspiration we got from previous generations of creators.”

TRAKGIRL, producer (Andra Day, Jhené Aiko, Vic Mensa): “It’s been an important mission of mine to help young women break into music-making, and GarageBand is a powerful creative tool that everyone has access to. I hope my Producer Pack will inspire people globally to embrace their creativity and show that anyone can follow their dreams and get involved in music production.”

Companion Experience for “Watch the Sound With Mark Ronson”

In the new Apple Original docuseries “Watch the Sound With Mark Ronson,” Oscar- and Grammy Award-winning producer-artist Mark Ronson explores the intersection of technology and musical innovation. With the exclusive “Watch the Sound With Mark Ronson” Producer Pack in GarageBand, users can extend the viewing experience by getting hands-on time with GarageBand versions of the music technology featured in every episode, from sampling to drum machines, synths to reverb, and vocal effects to distortion.

Mark Ronson, artist and producer (Adele, Bruno Mars, Lady Gaga): “Our new series, ‘Watch the Sound With Mark Ronson,’ explores and celebrates the intersection of music and technology, and it is exciting to have GarageBand bring the beats and sounds from the show to anyone who is inspired to create their own songs. This Producer Pack delivers the creativity and excitement of the show in a way I never imagined and couldn’t be more excited about.”

So if you are an Apple GarageBand user, do let us know your favourite feature or track from the all-new Sound Packs that are available to download for free.

One thought on “Apple GarageBand now lets you jam with musicians like Dua Lipa, Lady Gaga, and more with All-New Sound Packs”