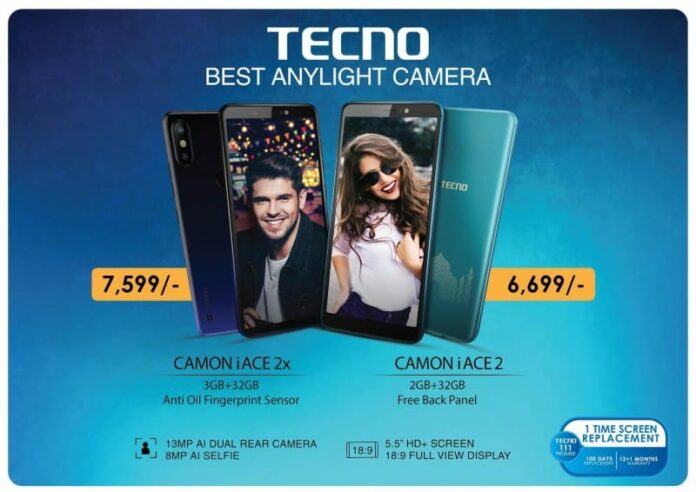 The newly launched Tecno Camon iACE2 and iACE2X smartphones feature a 5.5-inch 18:9 HD+ display, they are powered by a Quad-Core MediaTek Helio A22 processor clocked at 2GHz and comes in two variants –  with 2GB RAM and 32GB  storage(iACE2) and 3GB RAM with 32GB storage(iACE2X) along with microSD card support up to 128GB. These run on a custom skin dubbed as HiOS 4.1 based on the Android 8.1 Oreo and are packed with a 3050mAh battery with AI power management.

On the camera front, the smartphones are equipped with 13MP AI rear camera with f/1.8 aperture and a secondary VGA(0.3MP) camera for with dual LED soft lights, AI Auto Scene Detection (ASD) based on deep learning algorithm which detects all type of light conditions and automatically adjusts the brightness and contrast ratio in outdoor conditions. Both the smartphones come with 8MP AI selfie camera with f/2.0 aperture and front flash. The camera can scan up to 228 facial points to create a more detailed and beautiful selfie.  It also comes with AI Bokeh mode. The iACE2x comes with a fingerprint sensor at the rear and both the device come with AI face recognition technology which provides quick Face Unlock under 0.3 sec. Other features of the device include dual 4G VoLTE support, 3.5mm audio jack, Wi-Fi 802.11 b/g/n, Bluetooth 4.2, and GPS.